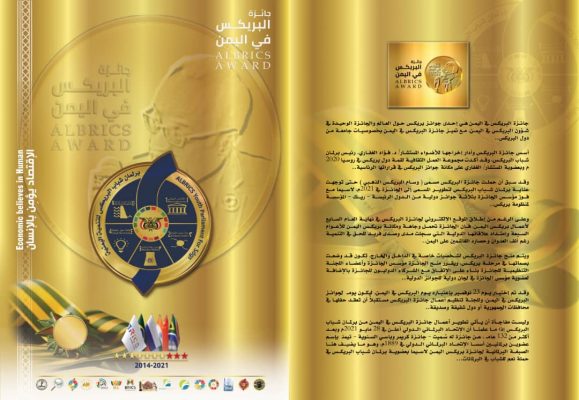 He founded ALBRICS Award and directed its output to the spotlight. Counselor / Dr. Fouad Ghafari. Chairman of ALBRICS Youth Parliament, the Cultural Working Group of ALBRICS Summit in Russia 2020, with the membership of Counselor / Al-Ghafari, confirmed the status of ALBRICS awards in its presidential decisions.

ALBRICS award had previously been called the (Golden ALBRICS Medal) until ALBRICS Youth Parliament directed the attention of developing the name to the award in 2021, especially with the award’s founder winning three international awards from the main countries – RIC – the founders of ALBRICS system..

Despite the launch of ALBRICS Award website at the end of the seventh year of BRICS Yemen’s work, the award bears the prestige and prestige of ALBRICS Yemen for the seven years and the extension of its international relations, which recorded a unique extent and resonance for the right to development despite the aggression and its brutal siege on Yemen.

ALBRICS award is granted to private personalities at home and abroad, who have put their fingerprints in ALBRICS stage. The award founder and members of the award’s organizing committee decide to award the award based on an agreement with the award’s international partners, in addition to the award’s founder’s membership in international committees for international awards.

November 23 has been chosen as ALBRICS day in Yemen, to be a day for ALBRICS awards in Yemen, and the committee organizing the work of ALBRICS award in the future may hold its ceremony in the governorates of the Republic or in sisterly and friendly countries..