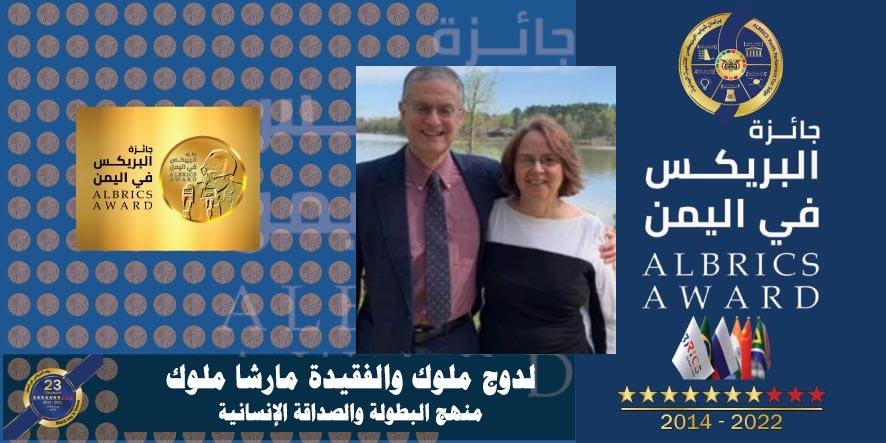 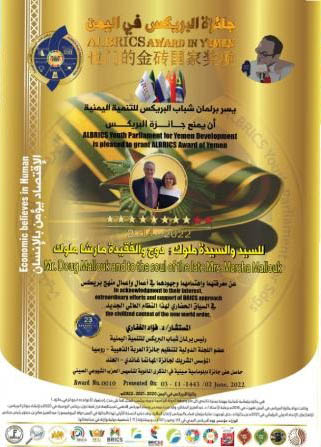 For the July 10 memorial of our missed friend and sister, Marsha Mallouk,

I must place on record my appreciation to the friends in the LaRouche organization who did not delay their efforts in comforting us and did not miss any time to covering part of what Marsha was helping me with in Yemen.

Marsha devoted a great portion of her last years in this life for arousing the attention of the youth and children of Yemen who will grow up with this fragrant memory of her.

She was, although at a great physical distance there in America, closely behind our dream of development and to end relief projects and conditional aid, but rather focus on projects targeting youth and children, and she and her husband, the brave Doug, did not hesitate to participate in the shaping of the BRICS Day in Yemen, in which we announced the BRICS Award.

For that, we have announced for this year before the start of the second BRICS Day ceremony, that one of the BRICS 2022 Award will go to the Al-Mallouk, Marsha and Doug, for their being a role model and heroes and great friends of Yemen.

And for the memory of Marsha Mallouk, with pain and sadness in my heart mixed with pride and joy, I read the statement of the Minister of Foreign Affairs of the Republic of Yemen, Engineer Hisham Sharaf, on the departure of Marsha Mallouk.
🇾🇪🇾🇪🇾🇪🇾🇪🇾🇪

The Yemeni Foreign Minister offers condolences to the Schiller International Institute on the death of political activist Marsha Mallouk.

His Excellency Eng. Hisham Sharaf, the Yemeni Foreign Minister expressed his deepest sympathy to the dear friend Doug Mallouk on the passing of the companion of his life’s journey and wife the American fighter, Marsha Mallouk after a life marked by struggle and advocacy for development and peace.

From Yemen, His Excellency the Minister of Foreign Affairs valued the spirit of sincere advocacy that comrade Marsha Mallouk enjoyed in her defense of Yemen’s rights, specifically in the corridors of the US Congress to stop arms sales to the perpet-rators of the aggression against Yemen.

The Foreign Minister, recalling her participation in the First BRICS Day in Yemen (in November 2021), emphasized that Mrs. Marsha Mallouk was a role model for women pioneers, especially in her adoption of the cause of Yemeni in the LaRouche Movement together with the BRICS children and youth of Yemen.

In his message of condolences on behalf of the Yemeni government, His Excellency Eng. Hisham Sharaf expressed his sincere condolences to his friend the Chairwoman of the Schiller Institute, Mrs. Helga Zepp-LaRouche, and all the members of the LaRouche Movement around the world who grieve for the tragic loss of ( Marsha ) their tenacious and courageous comrade.

She will remain present in the memory of the advocates and lovers of peace.